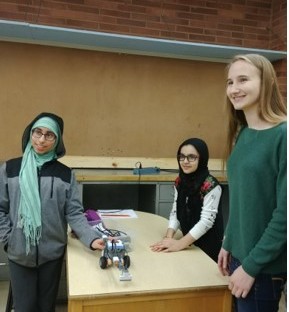 Scarf carefully thrown on her head, glasses askew on her nose, sixth grader Fatima grinned as she stared at the robots performing in front of her. She stood in awe with her mother and the rest of the crowd. The robots belong to the Wilson Robotics team, who have come to perform at their second annual Stephens Creek Crossing robotics night. Her mother, Zakia, noticed the look on her daughter’s face and immediately came up with a brilliant idea

In the beginning of the school year, Fatima’s school ( Muslim Educational Trust, a private school in Beaverton) had announced a mandatory science fair. Fatima joined forces with her two best friends Nergez and Sumayah. They decided to do their science project on robots.

“She [wanted] to make robots do the commands of a dog,” her mother said,”and I knew it was a good idea because when it comes to playing on the computer or building dogs, I don’t even have to remind her.”

Their teacher approved their idea, and the girls excitedly planned to start over winter break. However, problems began to arise. Sumaya’s family decided to move to Kenya and she was too busy with packing and saying her goodbyes to work on the project. Nergez’s family also left for a vacation. Fatima, left alone, also abandoned her project.

That day however, Fatimah’s mom noticed how excited Fatimah was as she watched the robotics show. As they were standing, Zakia noticed her old friend Mathew Johnson, and they began talking about robotics. She and Johnson had both taken their kids to Kung Fu together, and his son, Sam Johnson, was a Wilson Alum who had been the robotics captain the previous year. Zakia began explaining her daughter’s predicament, and Johnson promised he would contact her with help. “I couldn’t believe how fast he responded. Thank God for [him],” Zakia said. Johnson quickly got them in touch with one of the team’s captains, Alissa Bergquist, for help.

Berquist, a Wilson high school senior, first discovered her love of robotics in fifth grade while watching the MythBusters.“Whenever I would see the robots, I would just go crazy,” she said.

But that passion was never fully realized until her freshman year at Wilson. At that time, the school’s robotics club was only a year old. Bergquist quickly joined and was the only female member. Although she did participate in other extracurriculars such as piano and cross country, robotics quickly became her one true love.

Bergquist changed her experience being the only girl in a group of twenty boys into a positive one. Instead of letting those feelings of ‘otherness’ overwhelm her, Bergquist utilized it to empower herself and other girls. She began tirelessly campaigning to encourage girls to join the team. She began recruiting at one of Wilson’s feeder schools, Jackson Middle School, at their annual Girl’s Night. Due to her efforts, the population of girls in Wilson Robotics grew from one to eleven, making up over thirty percent of the members.

Bergquist happily agreed to help Fatima. Over this past winter, she frequently met up with her.“I introduced them to Lego robotics, which is the most basic and simple one,” she said, “and they loved it”.

Scott Bremmer, a freshman on the team, and Bergquist first taught Fatima to program and then left her to finish it on her own. “At first I was nervous, but she [Bergquist] set me at ease and told me to think positive,” Fatima said.

Fatimah was enamored. And so was her partner Nergez, who had returned. They successfully created a science fair project, working hard with Alissa by their side. Bergquist also became their mentor, inviting them to her practices and continuing to teach them the basics of the practice.

Fatima and her mom are incredibly grateful for the doors Bergquist opened for them.“[Fatima] didn’t win, but she worked really hard, she did great,” Zakia said.“I don’t know how to thank [Bergquist] and the people who connected me to her. She is a wonderful girl.”

As for Bergquist, her quest to involve more girls in tech continues. In the past she had volunteered with both Chicktech and Saturday Academy, and hopes to do more similar volunteer recruiting work in the future. “I want [these girls] to know they’re not the only one, and that they shouldn’t be scared of being in STEM,” she said. 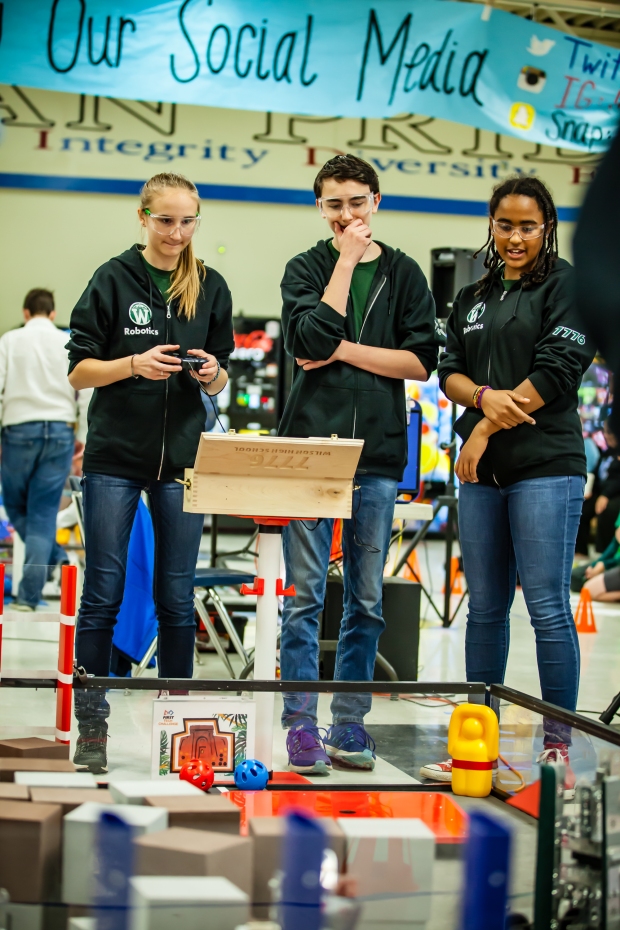 Alissa Bergquist and teammates at a one of the many robotics matches they compete in during their busy season.

Alissa (left) grins happily as she shows off her robots to Fatima(right) and a friend.